Screening: A Selection of Work by Simone Forti
Followed by a discussion via Skype with Forti. This event was organized by Julie Martin and Cathy Weis. 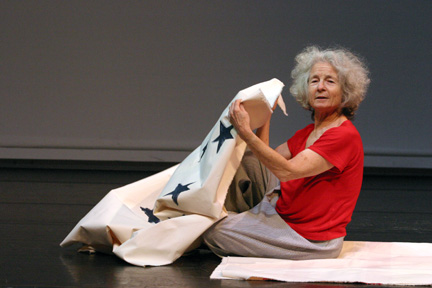 On February 22, the film series features early and later work by Simone Forti. The program includes News Animation (1986), Green Mountain (1988), and Nonfictions (2014). Following the screening, Forti will participate in a discussion via Skype.

News Animations is a practice and performance form Forti developed in the early 1980s and still uses today. In this program, we will show an early animation, a studio session, which she filmed at Mad Brook Farm in Vermont. Lisa Nelson is on camera.

Green Mountain was created when Forti brought the members of Simone Forti & Troupe to Mad Brook Farm to work on a land portrait of that North East corner of Vermont. They arrived as the snow was melting and spent their days in the woods at the brook and in Lisa Nelson and Steve Paxton's beautiful, newly built, studio. They met with Ed Verge, an Abenaki Indian who lived in the area. Ed took them to some special sites, and they made a recording of him recounting the history of place. In this program, we will screen Nelson’s documentation of the work-in-progress the group performed while at the farm.

NONFICTIONS - Gorbachev Lives/Zuma News/Questions is a collaboration between Jeremiah Day, Simone Forti, and Fred Dewey. The work consists of a three-channel, looping, silent HD video installation and features cinematography and production design by Jason Underhill. It premiered at the Santa Monica Museum in 2014. In this program, it will be shown as a simultaneous projection.