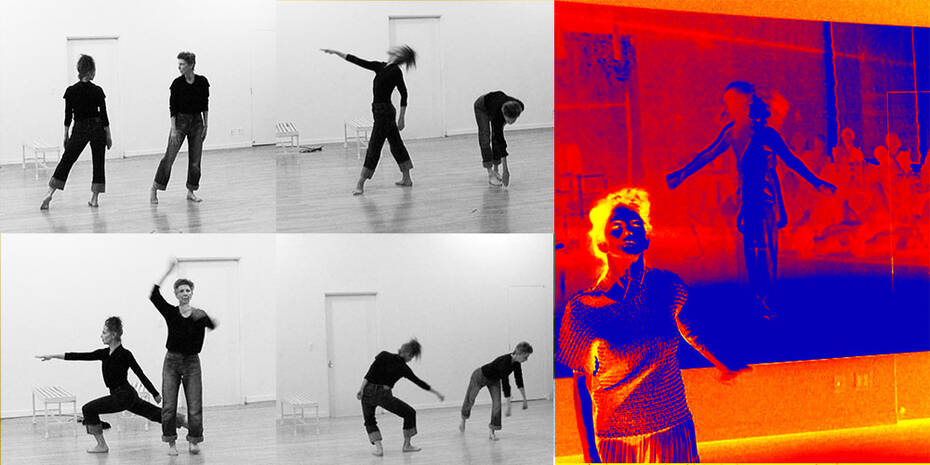 Performers Eva Karczag & Vicky Shick return to Sundays on Broadway to present a re-working of their small duet, "your blue is my purple." They are longtime colleagues dating back to the 1980's in the Trisha Brown Company. To this day, Shick and Karczag are often mistaken for each other on the street and even on stage. In this duet, they continue to investigate their connections.

Cathy Weis joins the program to perform Down at the Courthouse. As she moves onstage, Weis talks about civil service and moving through the world. Her live image is projected behind her as she tells her stories through voice and movement.

All Sundays on Broadway events begin at 6:00 pm. Doors open at 5:45 pm at WeisAcres. Keep in mind, this is a small space. Please arrive on time out of courtesy to the artists.

Sundays on Broadway events are free and open to the public.

Eva Karzcag: independent dance artist. For the past four decades has practiced, taught, and advocated for explorative methods of dance making. Performs solo and collaborative work internationally. She was a member of the Trisha Brown Dance Company (1979-85), received her MFA (Dance Research Fellow) from Bennington College, VT, and is a certified teacher of the Alexander Technique. Her performance work and her teaching are both informed by dance improvisation and mindful body practices that engender trust in the body's innate capacity for ease, efficiency and integrated openness.


Vicky Shick has been involved with the New York City dance community for the past three decades. She was a member of the Trisha Brown Company for six years, and for over 20 years, has shown her own work, mostly with visual artist Barbara Kilpatrick and sound designer Elise Kermani. She also has worked and performed with many cherished New York-based colleagues. Shick teaches at Hunter College and for the Trisha Brown Company, at Movement Research, and regularly teaches abroad, including in her hometown, Budapest. She has created pieces at several colleges including Arizona State University, Barnard College, George Washington University and at Bryn Mawr College and has regularly restaged Trisha Brown’s dances. Shick is currently a Movement Research Artist in Residence, a 2006 grant recipient from the Foundation for Contemporary Arts and was a Guggenheim Foundation Fellow in 2008-2009.