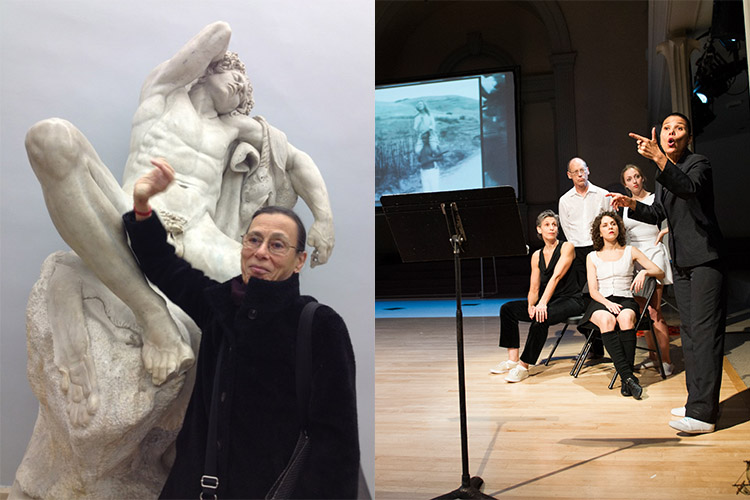 This week, Sundays on Broadway welcomes Yvonne Rainer and Patricia Hoffbauer to WeisAcres.

Yvonne Rainer will present a lecture, “What’s So Funny? Laughter and Anger in the Time of the Assassins,” and some other stuff involving the Raindears.


Patricia Hoffbauer will present "Getting Away with Murder, A woman's perspective." Medieval Women, Mythological Bitches, Old Testament Heroines, and Wonder Woman. From Plato’s definition of the “wandering uterus,” as an angry and desirous animal inside a woman’s body, to rumors about the sufficient presence of female choreographers in the dance world, Hoffbauer works on a performance shaped by a series of interferences drawn from historical, cultural, personal references with guest interlopers Malcom Low, Peggy Gould, Charmaine Warren, among others. Images accompanying work produced by Peter Richards.


All Sundays on Broadway events begin at 6:00 pm. Doors open at 5:45 pm at WeisAcres. Keep in mind, this is a small space. Please arrive on time out of courtesy to the artists.


Sundays on Broadway events are free and open to the public.

Yvonne Rainer, one of the founders of the Judson Dance Theater (1962), made a transition to filmmaking following a fifteen-year career as a choreographer/dancer (1960-1975). After making seven experimental feature-length films  — “Lives of Performers” (1972), “Privilege” (1990), and “MURDER and murder” (1996), among others — she returned to dance in 2000 via a commission from the Baryshnikov Dance Foundation (“After Many a Summer Dies the Swan”). Since then she has made six dances, including “AG Indexical, with a little help from H.M.,” “Assisted Living: Do you have any money?” and “The Concept of Dust: Continuous Project – Altered Annually.” Her dances have been seen throughout the U.S., including the Whitney Museum, the Museum of Modern Art, the Kitchen, Dia Beacon; in Europe at the Louvre and Montpelier, also Documenta 12, Helsinki, Italy, Dublin; and Sao Paulo, Brazil. Museum retrospectives of her work, including drawings, photos, films, notebooks, and memorabilia, have been presented at Kunsthaus Bregenz and Museum Ludwig, Cologne (2012); the Getty Research Institute, Los Angeles; Jeu de Paume, École des Beaux Artes, La Ferme du Buisson, Paris, and Raven Row, London (2014). A memoir — “Feelings Are Facts: a Life” — was published by MIT Press in 2006. A selection of her poetry was published in 2011 by Paul Chan’s Badlands Unlimited. Other writings have been collected in "Work: 1961-73" (1974); "The Films of Y.R." (1989); and "A Woman Who…: Essays, Interviews, Scripts (1999).


Patricia Hoffbauer, a Brazilian-born New York dance artist, has been making performance work since the late 1980s. Her collaborative relationship with writer/performer George Emilio Sanchez dates back to “Who Killed Carmem?,” an installation commissioned by the Whitney Museum at Phillip Morris.  Her piece “Para-Dice” was presented by Danspace Project in 2010 & 2013. She was a 2015 Gibney Dance Center DIP artist and her “Dances for Intimate Spaces and Friendly People” premiered in September of 2015 on four of the Center’s studios simultaneously with 14 performers. She has taught at Hunter College and Princeton University’s Lewis Art Center, among other schools, and is now at NYU’s Tisch School of the Art’s Open Arts Program. This year she is a Movement Research Artist in Residency. Her writings have appeared at The New Museum book “New Visions,” edited by Ella Shohat and Coco Fusco; “writings on Dance,” Movement Research Performance Journal, and PAJ. She is  a contributing writer to the upcoming “Bodies as Archive” book by the Pew foundation. Hoffbauer curated an evening of the “Judson at 50 Platform” at Danspace Project. She is a founding member of Yvonne Rainer’s “Raindears” and has been part of the creation of six original full-evening pieces by Yvonne Rainer.  Hoffbauer’s new project “Getting Away with Murder” had its first iteration at Gibney Dance Center this past May.