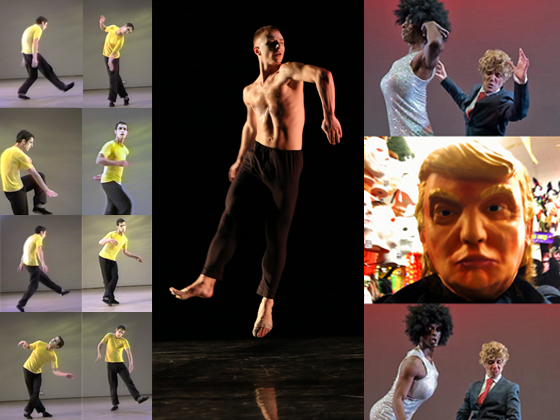 The Fall 2018 season kicks off with an evening of performance and video, co-curated by Jennifer Miller and Cathy Weis. The shared evening features performances by Patricia Hoffbauer and David Thomson, Nicholas Sciscione of the Stephen Petronio Company, and a video of Steve Paxton by Cathy Weis.


Two downtown choreographer/performers—Patricia Hoffbauer and David Thomson—will perform a duet they co-created entitled Dark & Stormy: When things get rough, grab pussy.  As our world spins out of control, the usual methods of rarefied abstraction no longer serves our best artistic intentions. We have resorted to literal forms of expression.  As in other historically perilous times, the absurd serves a dish of reimagined truth.

Cathy Weis will show excerpts of videos she shot in the mid-'80s of Steve Paxton improvising on stage in Philadelphia and in the fields of Vermont to the Goldberg Variations by J.S. Bach played by Glenn Gould.

Stephen Petronio Company will present an excerpt from Steve Paxton’s Goldberg Variations (1986), danced by Nicholas Sciscione, who received a 2017 Bessie nomination for his performance. Paxton’s Goldberg Variations is part of the Stephen Petronio Company’s Bloodlines series, a five-year autobiographical project that not only honors the lineage of American postmodern dance, but also traces the influences and impulses that have shaped choreographer Stephen Petronio, an artist uniquely positioned to preserve this postmodern tradition.


Keep in mind, this is a small space! Please arrive on time out of courtesy to the artists.


Please be advised: Due to repairs, the elevator will not be available this season. All audience members must use the stairs. We apologize for the inconvenience.

Patrícia Hoffbauer is a NYC dance artist originally from Brazil. She has performed and collaborated with many artists and wore many hats throughout her decades in New York City. Her work has been shown all over the US and in many NYC downtown spaces and in Brazil. She is a founding member of Yvonne Rainer’s Raindears and teaches full time at NYU’s TISCH.

Steve Paxton has researched the fiction of cultured dance and the 'truth' of improvisation for 55 years. He lives on a farm, and he has received grants from Change, Inc., E.A.T., the Foundation for Performance Arts, John D. Rockefeller Fund, and a Guggenheim Fellowship.  He has been awarded two NY Bessie Awards, and is a contributing editor to Contact Quarterly Dance Journal.  He was one of the founders of the Judson Dance Theater, Grand Union, Contact Improvisation, Touchdown Dance for the visually disabled (UK), and began his career studying modern dance techniques, ballet, Aikido, Tai Chi Chuan, and Vipassana meditation.  He performed with the Merce Cunningham Dance Co. from 1961-65.  He lectures, performs, choreographs and teaches primarily in the USA and Europe. In 2008, he published a DVD with ContreDanse in Brussels, 'Material for the Spine'.  In 2009, he re-choreographed 'Ave Nue' (1985) in Amsterdam, and toured Japan, including 'Night Stand' with Lisa Nelson, in Tokyo. With Contredanse of Brussels, he, Florence Corin and Baptiste Andrien have developed the Phantom Exhibition, a multi-image room of meditations on Material for the Spine, featured in the Super Bodies Triennale in Hasselt, Belgium.  In 2013 he was featured in Tanz I'm August, Berlin, Germany; and 'Night Stand' was performed in NYC at Dia:Chelsea.  In 2014, his work 'Bound', with jurij Konjar, was presented in Ljubljiana, Venice, Munich.  In June 2014, he received the Venice Biennale Leone d'Oro for life-time achievement in dance. He received another Bessie in 2016 for the same reason. 'Quicksand', an opera by Robert Ashley, premiered in January, 2015 at the Kitchen, NYC, and Festival D'autumne in 2016, featuring set and choreography by Paxton, found a place on the NY Times’ 2016 ‘best 10 classical music performances’ list.

For over 35 years, Stephen Petronio had honed a unique language of movement that speaks to the intuitive and complex possibilities of the body informed by its shifting cultural context. Born in Newark, New Jersey, Petronio received a B.A. from Hampshire College where he began his early training. He was greatly influenced by working with Steve Paxton and was the first male dancer of the Trisha Brown Dance Company (1979 to 1986). Petronio has received numerous accolades, including a John Simon Guggenheim Fellowship, awards from the Foundation for Contemporary Performance Arts, New York Foundation for the Arts, an American Choreographer Award, a New York Dance and Performance “Bessie” Award, and a 2015 Doris Duke Performing Artist Award. In 1984, he founded Stephen Petronio Company, which has gone on to perform throughout the world, including 24 seasons at The Joyce Theater. Since 2015, the Company’s Bloodlines project has honored a lineage of American postmodern dance masters.

Cathy Weis is a dancer, choreographer, videographer, and Artistic Director of Cathy Weis Projects. In high school, Weis was a soloist in the Louisville Ballet. After graduating from college, she played in a cello quartet in Europe, tap-danced on the streets of San Francisco, and did a stint as a disco queen. Moving to NYC in 1983, Weis developed a signature blend of live performance with video. In 1996 she received a Bessie Award for creative work and in 2002 was awarded a Guggenheim Fellowship. In addition to her art practice she conducts Sundays on Broadway, a showcase for choreographers and performance artists that runs two full seasons annually. cathyweis.org