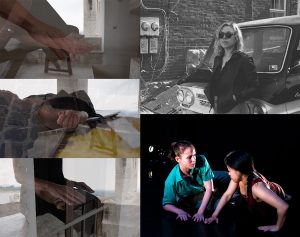 Join us for an evening of performance and video by Laura Bartczak, Emily Climer, and Diane Madden & Matthew Burdis, curated by Vicky Shick.

Laura Bartczak will present untitled (panorama study), a Super 8mm film accompanied by a system of movement scores, which explore topography, panning camera movement, body-scape, and pace. Through individual and group choice making, a new landscape is formed. The film is a moving portrait and a look into personal narrative revealed through gesture, and history embedded in the body. With collaborators Kay Ottinger, Hadley Smith, Katelyn Hales, Erin Sheehy, Corinne Cappelletti, Amity Jones, and Cherie Burnett.

Emily Climer’s Phantoms ghost phantoms is a dance of sustained disorientation. Two duet worlds collide, connected by states of unknowing, feelings of being unsettled, and sudden attempts at searching for order. In this dreamscape, the performers cope with physical forces outside of themselves, both real and imagined. The work is created in collaboration with performers Rachel Freeburg, Mei Maeda, Dustin Maxwell, Katie Skinner, and sound designer Aaron Rourk.

Take 3 is a collaborative work between dancer Diane Madden and artist-filmmaker Matthew Burdis as a result of their residency at the Mahler & LeWitt Studios in Spoleto, Italy. It places a dance Madden originally performed in New York in 2017 at Sundays on Broadway into the Torre Bonomo, a medieval tower in Spoleto in which Marilena Bonomo, a gallerist from Bari, hosted exhibitions, including an important group of early Sol LeWitt wall drawings.

Keep in mind, this is a small space! Please arrive on time out of courtesy to the artists.

Please be advised: Due to repairs, the elevator will not be available this season. All audience members must use the stairs. We apologize for the inconvenience.

Laura Bartczak is a movement and visual artist originally from Pine, CO. Her film work has been presented by Anthology Film Archives, Lubov Gallery, Sarah Lawrence College, Mono No Aware, CATCH 70, Gibney Dance Center, DCTV, Dance Film Association, and Trans Pecos.  Her recent choreography has been presented at The Domestic Performance Agency, Pie and Performance, and Secret Project Robot. She has recently performed in the work of Laurel Atwell and Shaun Irons/Lauren Petty.Laura photographs dance processes and performances, and teaches Super 8mm filmmaking with Mono No Aware in Brooklyn. laurabartczak.sqaurespace.com

Emily Climer is a dance maker based in Brooklyn, NY.  The cultivation and exposure of ensemble communication in improvised forms—and the challenge of building those layers of meaning in set choreographic forms—is central to Emily’s work. She has shown her dances as part of the Vision Festival, the Never Before Never Again Festival, the No Theme Performance Festival, and Split Bill at Triskelion Arts, among others. As a performer, she has recently worked on projects by Susan Sgorbati & Elliot Caplan, Tori Lawrence & Co., Tiny Trip Productions, and Tyler Rai. This December, she will perform in a new dance by Mina Nishimura at Gibney. In addition to choreographing and performing, Emily writes and edits books for young readers.

Diane Madden is a performer, choreographer, director and teacher based in NYC. Currently Associate Artistic Director of the Trisha Brown Company, she has contributed to the creation and performance of Trisha Brown’s work since 1980. She presents her own solo and collaborative choreography at home and abroad and has enjoyed working with choreographers Jerome Bel, Lance Gries, Juliette Mapp, Polly Motley, Vicky Shick and Cathy Weis. Madden’s teaching weaves anatomically grounded technique with improvisation, composition and performance skills. Her worldwide students range from dance artist professionals and college students to artists from other disciplines including actors, singers, visual artists and composers. Since 2006, Madden has been greatly influenced by her study and practice of Aikido with Fuminori Onuma. The Princess Grace Foundation has recognized Madden with two awards, in 1986 and again in 1994 for sustained achievement. She also received a New York Dance and Performance Award (Bessie) in 1989.

Matthew Burdis (b. 1993, Newcastle upon Tyne) is an artist filmmaker. He studied at Chelsea College of Art and Design. After receiving the Landmark PLC Award for his silent black and white film ‘Lindisfarne One One’ he received funding through Channel 4 to make a film in partnership with the Insti­tute of Contemporary Arts (ICA), London, as part of the Random Acts Programme. He is now working on a major project commissioned by the Mahler Foundation: a feature length film responding to the places where Gustav Mahler composed and lived. He is also working on an Elephant Trust funded series of 16mm films with pho­tographer John Baker. He convenes the Chelsea Film Forum at Chelsea College of Art and Design and has screened his own work across the UK and Europe.