Artists with disabilities and artists whose work disrupts normative notions of what constitutes a dancing body will come together in conversation. We will consider the artistic work of the panelists and how it opens up possibilities for dance to move beyond narrow historical paradigms to include a more expansive range of physical experience and formal content. 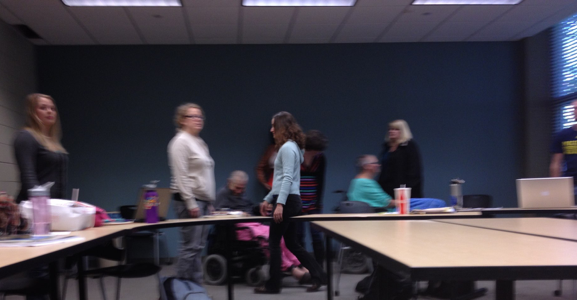 Mat Fraser, one of the U.K's best known disabled performers, has gathered a large body of work over the last 15 years in many different arts media; telling stories dramatically is where his heart lies. Mat is a multi-disciplinary performing artist, writer, and musician, who has played to audiences from The Olympic stadium, The Royal Albert Hall, to many dive bars and late-night clubs, all the while employing his "Cripping up the scene" attitude of working as a Disability Artist within mainstream arts environments.

Petra Kuppers is a disability culture activist, a community performance artist, and Professor at the University of Michigan. She also teaches on Goddard College's MFA in Interdisciplinary Arts. She leads The Olimpias, a performance research collective (www.olimpias.org). Her book Disability Culture and Community Performance: Find a Strange and Twisted Shape (2011) explores arts-based research methods. She is editor of Somatic Engagement (2011), and her most recent book is Studying Disability Arts and Culture: An Introduction (2014), a book full of practical exercises for classrooms and studios.

Marissa Perel is an artist, writer and independent curator based in Brooklyn, NY. She is interested in the body's relationship to gender, desire and power within and against socio-political constructs. Her work explores these dynamics through writing, performance, video and installation. Perel holds a B.A. in writing from Naropa University and an M.F.A in studio/performance from the School of the Art Institute of Chicago.

Cathy Weis is a dancer, choreographer & videographer based in New York City. Weis' work features a signature blend of live performance and video. She won a Bessie award for her 1996 piece Fractured: Just the Fracts, Ma'am and was awarded a Guggenheim Fellowship in 2002. In 2014, she launched Sundays on Broadway, a weekly series hosted at WeisAcres Studio in SoHo that features performances, film screenings, discussions, parties and all manner of events.

Kathy Westwater is a NY-based choreographer and, since 2001, faculty member at Sarah Lawrence College, where she received an MFA. In the late 80s and early 90s she studied with postmodern dance pioneers Simone Forti, Dana Reitz, and Sara Rudner. She has performed in works by Simone Forti, Steve Paxton, Sally Silvers, K.J. Holmes, and Merián Soto & Pepón Osorio. Since 1996, she has collaborated with visual artists, architects, composers, and poets to create numerous works presented at New York Live Arts, Brooklyn Museum, Franklin Furnace, Danspace Project, Joyce SoHo, 92nd Steet Y, Performance Space 122, Pratt Institute, and Reed College, among many other places. From 2008-2013, she located her artistic research at Fresh Kills, once the largest landfill in the world.