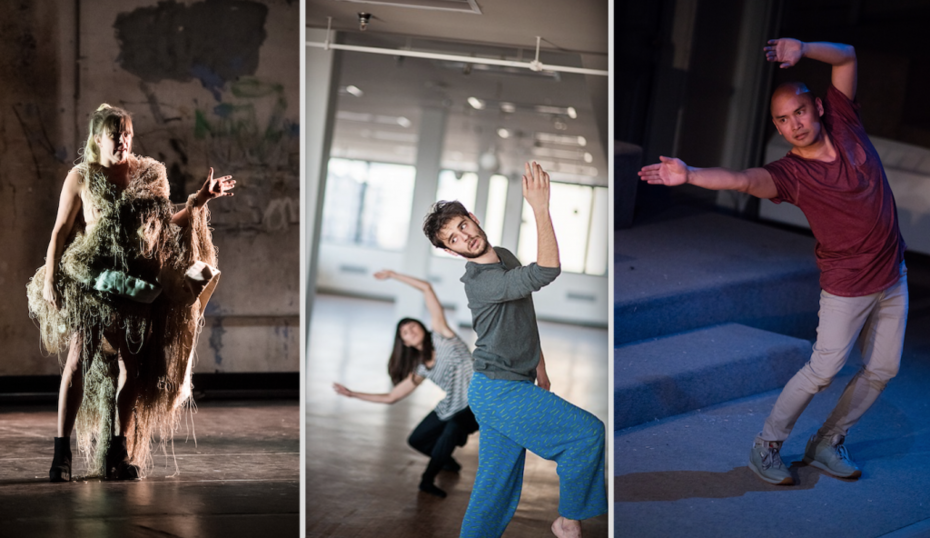 Justin Cabrillos, joined by performer Matt Shalzi, will share an excerpt from a larger project with the working title as of it.

Choreographer Samuel Hanson and writer/musician Alexander Ortega present their second collaboration, a work inspired by their relationship as a dance artist and writer/editor at a dance publication.

Adrienne Truscott will continue to embrace, play with, undermine, and disregard the forms she loves. “She will see how this works on Broadway—historically a place for mediocrity to be costumed and soundtracked—and on Sunday—historically understood as a day of rest.”

All events begin at 6:00 pm. Doors open at 5:45 pm at WeisAcres, 537 Broadway, #3. There are no reservations. Seating is first come, first served. Keep in mind, this is a small space! Please arrive on time out of courtesy to the artists.

Beginning this season, we suggest a $10 contribution at the door. With this small contribution, we are able to continue bringing unique performances every Sunday and giving artists an intimate space to share their ideas.

Justin Cabrillos is a choreographer based in Brooklyn. He is a 2017 Artist-in-Residence at Movement Research. He was a 2016 danceWEB scholar at ImPulsTanz in Vienna under the mentorship of Tino Sehgal, 2011 Greenhouse grant recipient (Chicago), and a 2008 fellow at Ox-Bow School of Art. His work has been commissioned by Danspace Project and the IN>TIME Series in Chicago. Cabrillos has shown work at the Leopold Museum (Vienna), the Museum of Contemporary Art Chicago, and Roulette. He holds an MFA from the School of the Art Institute of Chicago, and he has performed with Jen Rosenblit and Julian Barnett.

Samuel Hanson was born in Salt Lake City in 1988. His formative training was with Hilary Carrier, Tina Misaka and Chara Huckins. In the last few years he's performed for choreographers Diana Crum, Isabel Lewis, Ishmael Houston-Jones, Yvonne Meier, Kirsten Schnittker and Amity Jones and in collaboration with visual artists Maayan Strauss and Alexandra Pirici. Before moving to New York he worked closely with Utah based choreographer Ashley Anderson as a performer and on curatorial projects and a journal of dance and performance in the Western US through her platform loveDANCEmore. He works as a teacher and arts writer.

Alexander Ortega makes music under his own name and with the band Filth Lords. He's collaborated with dance artists Samuel Hanson, Ishmael Houston-Jones and with the collective Movement Forum. He also edits SLUG Magazine and writes experimental fiction.

Adrienne Truscott is a choreographer, writer, and performance artist/maker. Her critically-acclaimed and award-winning Adrienne Truscott's Asking For It: A One-Lady Rape About Comedy Starring Her Pussy and Little Else! has been touring for 4 years and is considered a critical impetus to the evolving conversation about rape culture. A recipient of the Doris Duke Impact Artist Award, a 2017 Adelaide Fringe Artist Ambassadorship and the FCA Grant for Performance Art/Theater, she or her work has appeared at, in or on such varied places as the Sydney Opera House, Festival of Dangerous Ideas, The Moth, The Kitchen, PS122, Joes’ Pub, Melbourne and Montreal Comedy Festivals, the Sydney International Arts Festivals, La Soiree, Soho Theater, The Jimmy Kimmel Show, John Cameron Mitchell’s Shortbus, and CBGBs. Her essays have been published in two Australian anthologies and The Guardian among others. She is attracted to the possibility of failure as a reason to start working and she says yes more often than no.


Lower Manhattan Cultural Council empowers artists by providing them with networks, resources, and support, to create vibrant, sustainable communities in Lower Manhattan and beyond. LMCC.net